How I came to beekeeping

My great-grandfather contributed to the foundation of the local group Miesenbach of the beekeeping union in 1909. Due to his enthusiasm for the bees he was also able to enthuse his son for the work with bees. 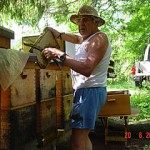 Decades later my grandfather inspired my interest in bees when I was still a small boy. When I was 15 he had to stop beekeeping due to medical reasons. Due to the help and support of beekeeping master Wallenböck I began beekeeping myself at age 24. He worked at the institute for the study of beekeeping in Grinzing, in Miesenbach he supervised a bee shed for the institute.

Later I was supported by beepeeking master Haara, Dr. Kolich, Dr. Moosbeckhofer and beekeeping master Oberrisser and so I was able to educate myself further and to always be up-to-date. 1971 I joined the local group of Miesenbach and was promptly nominated as secretary. 1986 I became chairman of the group. 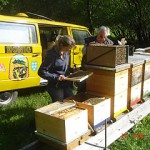 In the 1980s I had reached my personal maximum number of more than 80 bee colonies.

As my grandfather did, I often and readily took my granddaughter (Yasmin) with me to the bees, since that is the only way for kids to develop a connection to nature from early on. 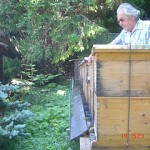 2009 I still had 27 bee colonies, today due to medical reasons I have only one left. But I still keep bees just as passionately as before! The secret of the bees will probably still be one for me at 100.

“As long as my health allows it, I will continue to work with bees! That is the last thing I will give up!”