Gentleness and health are the number one priority of our bee breeding. We breed exclusively with the domestic Carnica-bee. This race, common in the Eastern Alps, originally native in the Balkans, is famous for its gentleness. This low-maintenance honeybee however is also distinguished due to its resilience.

Our bee colonies are tested annually for their productivity, gentleness, health, development, honey production and inclination to swarm.

Starting Mid-May breeding queen bees, with a few hundred worker bees, are brought to the mating station in the Höllental in mating nucs. The mating station is located between Rax and Schneeberg (each is over 2000m high). The queen bees are being mated with by drones located there. The semen supply, which she stores in her semen glands, suffices for her whole life. After two weeks the mating is completed. Subsequently they come back and are on their way into a new bee colony.

The artificial insemination is a specialty field I occupy myself with. Gladly I share my knowledge about this with others for example in courses at the Lower Austrian beekeeping school in Warth. 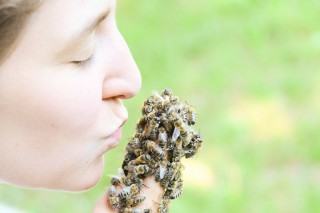 She has proof of descent, which identifies her as pure Carnica. She has good to very good marks in gentleness and honey productivity.

The marks of the parents are partially known.

This queen bee has a tested productivity year under her belt and passed at least with “Good”. She has proof of descent, which identifies her as pure Carnica.

The bee colonies which survived the winter and start into the new year are called nucleus. They populate 9 (flat frame) or 6 (Kuntsch) combs, are strong and healthy. These nuclei are fast growing, therefore they need to be positioned immediately, if you expect to harvest honey in the same year.
The quantity of nuclei we can provide is dependent on the overall success of hibernation. How many nuclei can be given out is not announced until April after winterkill.
Comb measure: flat frame Zander, Kuntsch
Queen bee: breeding queen bee, economy queen bee

This is a young bee colony, comprised of one unit of bees and a queen bee. It has 3 brood-combs, 1 honey comb and 1 pollen comb. For young beekeepers and newcomers it is the ideal way to get started with beekeeping. Since the hive is still in setup, no harvest of honey is to be expected in the first year.
Comb measure: flat frame Zander, Kuntsch
Queen bee: breeding queen bee, economy queen bee

Depending on the month the artificial swarm weighs between 1-3 kg. These are bees without a queen bee. The swarm is only in setup. It is part of the newcomer support.
Comb measure: independent
Queen bee: breeding queen bee

Artificially inseminated queen bees are not up for sale at the moment.